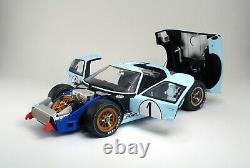 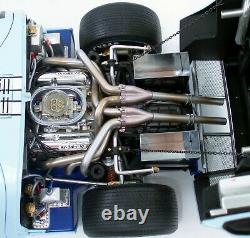 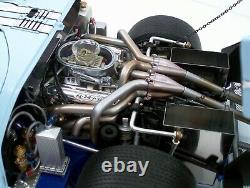 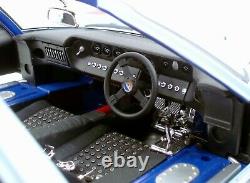 1966 Ford GT40 Mark II #1 Ken Miles & Denny Hulme 1:12 Diecast ACME LE MIB. We are all aware of the famous 1-2-3 finish of Ford's GT40s at the 1966 24 Hours of Le Mans. You may have even seen the movie, Ford vs. Ferrari where many new people understood about this famous car and its main driver, Ken Miles. This dominance would change in 1966. Ken Miles and Denny Hulme, along with the GT40s of Gurney/ Grant and Amon/ McLaren and Bucknum/ Hutcherson, set a grueling pace that the Ferraris could just not match. All of the P3 Ferraris had retired as the end of the race drew near and thus ensured the famous 1-2-3 GT40 finish. The finish however was not without controversy. Ford's execs wanted a rolling dead heat finish with their GT40s. Amon/ McLaren would cross the finish line first with Miles/ Hulme crossing just a few feet behind. Race officials declared Amon/ McLaren as the winner since they started the race further down the grid than Miles/ Hulme and were deemed to have driven a further distance than the #1 of Miles and Hulme. This left Miles furious as he was convinced that Ford did not want him to win. Had he won, he would have completed the Endurance Racing Triple Crown by winning Daytona and Sebring and Le Mans in the same season. This 1:12 scale diecast model has over 700 handcrafted parts including all of these superb features. Opening doors and rear cowl.