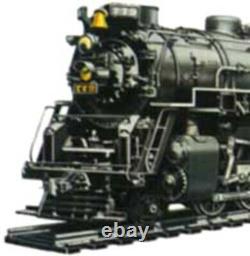 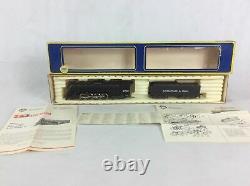 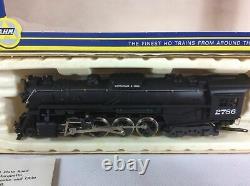 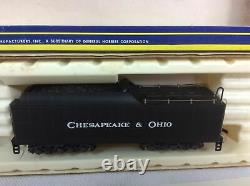 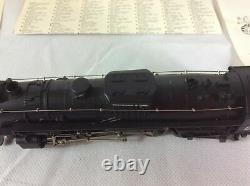 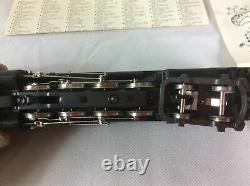 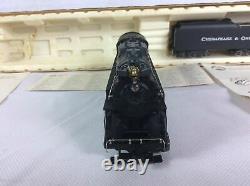 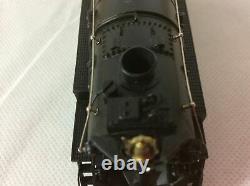 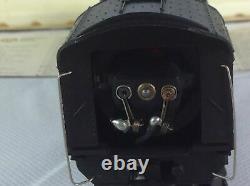 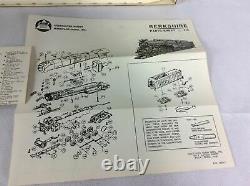 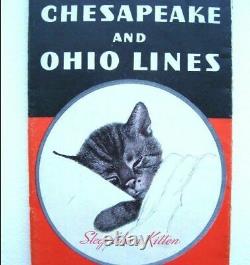 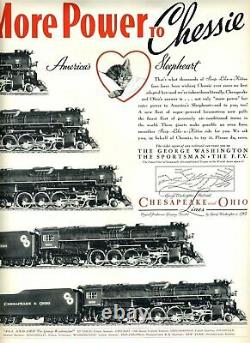 AHM/Rivarossi 2-8-4 Berkshire Steam Locomotive. A Kanawha by the C&O.

In 1902 the Cincinnati, Richmond and Muncie Railroad became the fourth railroad into town. This railroad would later become part of the Chesapeake and Ohio Railway Company (C&O). The Chesapeake & Ohio Railroad's Cincinnati to Chicago mainline saw its first through passenger service train in 1907 and later became known as the C&O of Indiana. The C&O offered limited passenger service on the line until 1948.

The route would not see another passenger train again until 1974 when Amtrak's tri-weekly Cardinal from Chicago to Washington, DC started using the line. The route eventually became part of the Chessie System in 1972 after merging with the Baltimore & Ohio and then CSX after merging with the Seaboard System in 1987. In 2004, CSX filed to abandon the remaining portion of the C&O through North Judson. Chessie the Kitten is probably the most endearing and certainly the most recognized symbols in American Rail history. Although you will get an argument from the Great Northern Railroad "Rocky" the Mountain goat crowd in the Pacific Northwest; the Great Northern Goat also appeared in that era.

The cuddly little kitten sleeping under a blanket with a paw thrust contentedly forward. The image was a campaign to popularize C&Os new air-conditioned sleeping car service, with the slogan Sleep Like a Kitten and Arrive Fresh as a Daisy in Air-Conditioned Comfort for the C&O passenger ads.

The C&O 2-8-4 Berkshire Steam Locomotive. The C & O had watched the development of the 2-8-4 on the Nickel Plate Road and the Pere Marquette through the "Advisory Mechanical Committee" which was common to the four railroads controlled by the Van Sweringens. It based its 2-8-4 design on the NKP and Pere Marquette "Berkshires". However, it chose to name them "Kanawhas" after the Kanawha River, which paralleled its mainline.

These locomotives were numbered 2700 through 2789. All of these locomotives had 69" diameter drivers, 26" x 34 cylinders, a 245 psi boiler pressure, they exerted 69,350 pounds of tractive effort and each weighed about 292,500 pounds. By mid-1952, the C&O had received enough diesel units that it began to retire even the "Kanawhas", which still had service time, and by 1957 all were retired.

All but the thirteen that were donated to various cities were scrapped by May 1961. Several are refurbished and the Indiana Railroad operates one. AHM - Rivarossi 2-8-4 Berkshire Steam Locomotive. The model proposes the prototype #2786, which entered service in 1947, with its original color scheme, Baker distribution, working front headlamp, and a higher capacity tender, with Buckeye bogies.

AHM/Rivarossi Berkshire 2-8 -4 "Kanawha". Rivarossi Italian-made model in the AHM line detail is all around done very smoothly and looks excellent Because of Rivarossi's unique mechanism, this engine, except for a small shaft coming down, has a completely see-through frame and full firebox, making this already great engine look even better.

Every walkway and step has full safety tread detail. The two grab irons on the front and the tender ladder are chemically blackened. The front coupler is a dummy mounted by a pin, so it's possible to mount a modified Kadee coupler in the front without too much trouble. Like all other AHM era Rivarossi steam engines, all the wheels have large flanges, and the motor is mounted in the cab, but there's still enough room to mount an engineer and fireman. All the lettering is very smooth and sharp.

Although new a good cleaning and re-oiling is always recommended given the age of the unit, the 2-8-4 ran very smoothly and quietly at scale speeds. Running free at 12 volts, it reached a speed of about 102 scale MPH and drew 0.28 amps. The maximum stall current at 12 volts was about 1.4 amps. Even though this is a pretty long engine, it can easily make it around 18 radius curves with no struggle.

The motor has a 3-pole armature, but it actually works pretty well at low speeds and has good low-speed control. The rear coupler box is frame mounted with a screw, making it easier to add a Kadee coupler and box. The engine picks up from the right rail with two drivers and two trailing truck wheels, and the tender picks up from the left rail with four wheels. Extra weight may be added to the tender for better electrical contact. The engine is pretty light-weight for its size, but because of its traction tire it should still be able to pull about 40 cars.

One-piece boilers, engine covers, cabs and tenders of pressure-cast high impact plastic. Steel main and side rods. Steel handrails and coupler release bars on both loco and tender. This unit has been in storage for over 10 years. It is recommend for longer running time and better performance to inspect , and clean out the gear case of all old grease, particularly if the grease has caked (hard , and dry) use Isopropyl alcohol and toothbrush. And lubing w/ Labelle 106 usually does the trick, Other bushing/ bearing points should be oiled w/ plastic compatible lubricant motor shaft, worm bearing as well as any axle and other pivot points. Upgrading to DCC NOT INCLUDED. TCS T1 Standard DCC Decoder. TCS T1KA Standard DCC Decoder w/KA4 Keep Alive. TCS WOWSound 101 Digital DCC/Sound Decoder.

TCS WOWSound 101KA DCC/Sound Decoder w/KEEP ALIVE. The box has storage wear but has protected the engine all these years insert shows yellowing and cracking.

The train engine itself is excellent condition. To prevent damage the delicate cellophane window and protect the unit.

Use care when opening box I recommend sliding the unit out on to a pillow upon receipt. Model layout & tips for The Chesapeake & Ohio free online. The Chesapeake & Ohio Historical Society is a non-profit corporation dedicated to interpreting the American Railway experience using C&O Railways history through drawings, documents, and artifacts which the Society collects, preserves, and makes available to as broad an audience as possible.

The Society's web page has 100's of photos, of all C&Os most famous and short-haul trains. The Society was founded for the purpose of obtaining, preserving, and disseminating information and material related to The Chesapeake & Ohio. Chesapeake & Ohio Historical Society website is easy to find online. The item "AHM/Rivarossi Berkshire 2-8-4 #2786 (Kanawha) C&O HO Scale Steam Locomotive & Te" is in sale since Saturday, March 9, 2019. This item is in the category "Toys & Hobbies\Model Railroads & Trains\HO Scale\Locomotives".