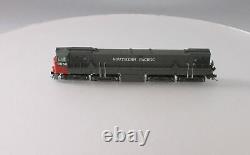 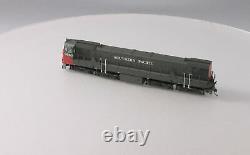 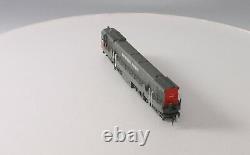 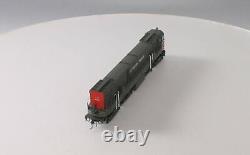 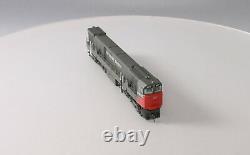 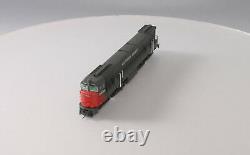 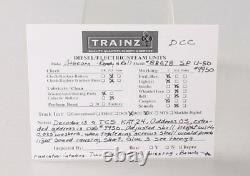 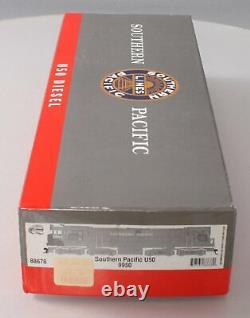 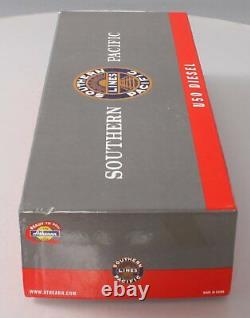 This item has been graded per TCA standards C-7: Excellent. The decoder is a TCS KAT24. The address is O3, and the extended address is cab #9950. The shell height was adjusted with 0.025 washers because when tightening the screws the shell would pinch the light board, which caused it to short. Additionally, three see-through radiator intakes were glued.

This engine was bench tested as good in DC and DCC. There are two side ladders missing, however, the overall appearance of this engine is excellent! It will make a great addition to any collection. The original box is included and in excellent condition. Athearn 88678 HO Scale Southern Pacific GE U50 Diesel Engine #9950 w/DCC EX/Box.

This is Athearn 88678 HO Scale Southern Pacific GE U50 Diesel Engine #9950. Fully assembled and ready for your layout.

DCC ready wiring harness installed (8 or 9-pin decoder). Two speaker mounting points molded into the underframe to accept speakers up to 1.20 in diameter.

Additional Information: In 1963, under the leadership of Union Pacific's Superintendent of Motive Power, David Neuhart, the railroad went shopping for a single unit diesel locomotive with 5,000 or more horsepower. His staff had conducted a study and found that maintenance costs on a diesel locomotive were the same regardless of horsepower. In 1963, the diesel horsepower race had just reached 2,500 horsepower. The only way to get 5,000 horsepower was by putting two diesel engine and generator sets onto one chassis. Given the wheel slip and traction motor technology at the time, eight traction motors and powered axles were needed to convert the horsepower into pulling power. EMD had already produced the DD35, two cables GP35s on one chassis. General Electric's answer was to do the same with two U25Bs, which created the U50.

The U50 was 83 feet 6 inches long and towered over most contemporary locomotives at 15 feet 10 inches tall. They weighed in at 559,620 pounds and produced 139,175 pounds of starting tractive effort. Inside the hood were two FDL-16 diesel engines, each with a generator, full radiator, and dynamic brake setup. The U50 rode on a two sets of two-axle AAR-B trucks mounted on a span bolster.

The trucks were recycled from the scrapped gas turbines. Up front was a tall, blunt nose cab without a front walkway, which gave the U50 its unique appearance. The first three U50s, UP 31, 32, and 33 were built in October 1963.

UP's second order for twelve units, number 34 through 45 followed in 1964 with five built in July, five in August and the last two in September. The final UP order for eight units, numbers 46 through 53, were delivered in 1965 with two built in May, three in June, two in July, and the last U50 was built in August. For the first few years, the U50s ran over most of the UP's main line.

After 1967, they were concentrated east of North Platte, but still ran system wide. Seventeen U50s were retired between September 1973 and February 1974. Three more were retired in November 1974, while the final three, numbers 45, 51, and 53, lasted until 1977. The units racked up between 740,335 miles and 1,091,626 miles in their service careers. Southern Pacific was also looking for a more powerful locom.

Please note, after seven days our systems may automatically re-list unpaid items. Explain why the item does not meet your expectations and how you would like us to handle the issue. If your item has been damaged try to include a photograph of the actual damages. Well do our absolute best to make you happy. Make sure to include your contact and order information when you return your items.

The item "Athearn 88678 HO Scale Southern Pacific GE U50 Diesel Engine #9950 withDCC EX/Box" is in sale since Friday, April 16, 2021. This item is in the category "Toys & Hobbies\Model Railroads & Trains\HO Scale\Locomotives". The seller is "trainz" and is located in Buford, Georgia.