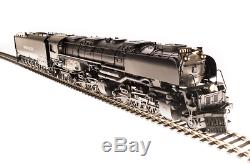 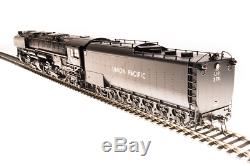 The Union Pacific Challengers were a type of simple articulated 4-6-6-4 steam locomotive built by American Locomotive Company for the Union Pacific. 105 of these locomotives were built between 1936 and 1943. The Challengers were about 122 ft (37 m) long and weighed 284,800 kg. A few were assigned to passenger trains operating through mountain territory to California and Oregon. The locomotives were built specifically for UP and much of the experience gained later went into the design of the famous Big Boy. The name Challenger was given to steam locomotives with a 4-6-6-4 wheel arrangement. This means that they have four wheels in the leading pilot truck, which helps guide the locomotive into curves, two sets of six driving wheels, and finally four trailing wheels, which support the rear of the engine and its massive firebox. Each set of six driving wheels is driven by two steam cylinders. In essence, the result is two engines under one boiler. The Union Pacific Railroad sponsored development of this type to meet the need for higher speeds in main-line service. Historically, articulated locomotives had been limited to slow speeds by factors inherent in their design. The technical breakthroughs achieved with the Challenger enabled the carrier to develop the Big Boy with the same speed expectations. Speeds in excess of 60 M. While unheard-of on other railroads using articulated steam locomotives, became commonplace on the Union Pacific. NEW Paragon3 Sound & Operation System FEATURING ROLLING THUNDERTM with Authentic Sounds and Prototypical Operation in both DC and DCC environments. Synchronized PUFFING SMOKE with Chuff Sound. Variable Puffing Smoke Intensity and timing. Integral DCC Decoder with Back EMF for Industry Best Slow Speed Operation in DC and DCC. Precision Drive Mechanism engineered for continuous heavy load towing and smooth slow speed operation.

Alternate Whistle / Horn where applicable for locomotive with air horn and steam whistle - both the main whistle and alternate can be easily played. Adjustable bell ringing interval for faster or slower bell. Numerous user-mappable functions with available keys.

Individually adjustable sound volumes for most effects. Specifications on this page subject to change.

We are an authorized Broadway Limited dealer. The item "Broadway Limited HO Scale UP Challenger 4-6-6-4 #3711 P3 Sound/DC/DCC Smoke 4981" is in sale since Saturday, August 18, 2018. This item is in the category "Toys & Hobbies\Model Railroads & Trains\HO Scale\Locomotives".