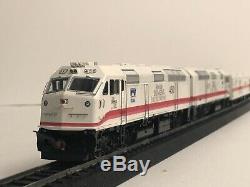 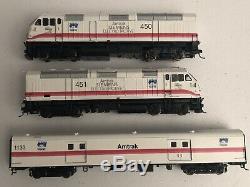 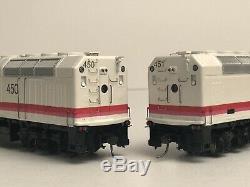 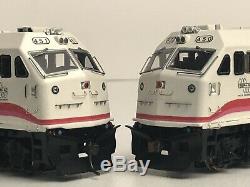 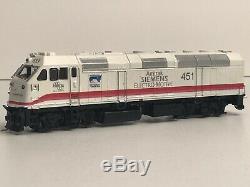 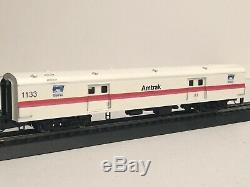 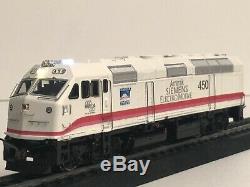 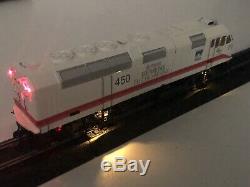 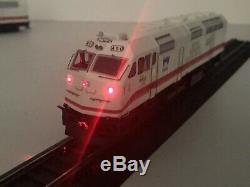 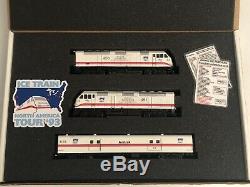 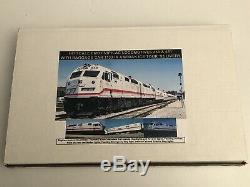 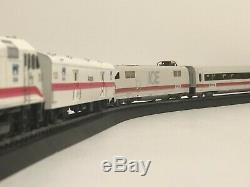 HELLO, AND THANK YOU FOR LOOKING!! Up for sale is a gorgeous custom built DCC set of HO scale Amtrak ICE 93 Tour F69PHACs with a custom painted matching Walthers Baggage car.

Both engines have SoundTraxx TSU-PNP8 decoders and LokSound. Head light and rear light, red marker lights on front/rear, flashing/alternating strobes, emergency red flashing beacon on the front of each engine, and interior cab/track inspection lights. In 1989, an experimental set of AC traction engines were built by EMD in collaboration with Siemens. Given the designation F69PHAC, only 2 examples were built. Amtrak did not pursue any further interest and they were relegated to storage. In 1993, DB and Amtrak brought the ICE Train (Inter City Express) to the US on a demonstration tour. Since the German ICE Train was electric, it needed some some good old American diesels to bring it around the nation. Amtrak brought out the F69PHACs and sent them on tour duty with a power converting heritage baggage car #1133. After the tour the engines were sent to a rail yard in Illinois where they still sit to this day, rusting away. These models were built on a stretched Walthers F40ph chassis and car body. The nose cone and rear section were removed and replaced with 3D printed parts. Flush mount, hand cut acrylic windows. Fully built and detailed interior cab with an engineer in each one. Detailed air piping and tanks, fuel fillers and gauges, wheel speed recorders, hand rails, grab irons, K5LAs in the fronts and single horns on the rears, independent/alternating flashing cool-white strobe lights, lenses on every light, yada yada. I tried to replicate the original engines as best as I could. The decoders are the 8-function Tsunami2 Diesel style. I chose these to replicate the EMD 710 diesel v-12 prime mover. Functions 1 and 2: Front and backup headlights.

Functions 3 and 4: red marker lights on front and rear. Functions 5 and 6 are the alternating strobe lights. I set these to flash independently and at a slightly different rate just like the real deals. Function 7 is the center red light. I set this to flash as a mars light when the emergency stop is pressed.

Along with the engines is nicely custom laser cut foam padding for storage and safety. The box is decorated with some photos and information about the train on the sides. Also included are two copies of laminated programming information. The front sides feature all functions 1-28 for the decoder. On the backs of these cards are the CVs and their settings that I used to configure the engines.

You can completely reprogram it however you like, and return it if desired. I set the engine sounds and horns to be at a different pitch so they sound slightly different when run together. Part of the configuration is setting lighting functions to operate in certain directions. The head light, strobes, and rear red marker lights operate when going forward.

When going reverse, the front red marker lights and back up head lights operate. The cab interior/track inspection lights operate in both directions.

Ive set this decoder to operate in DC mode so no DCC system is needed if you dont have one. You wont have the bell, horn, or control of any of the other sounds if you operate it that way. In DCC mode, F5 starts up the engine and F6 shuts it down.