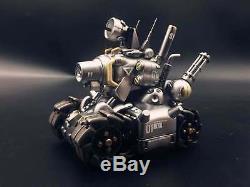 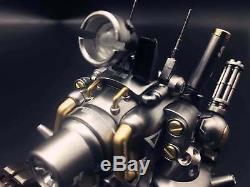 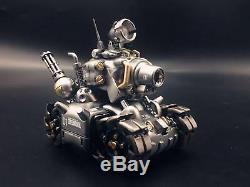 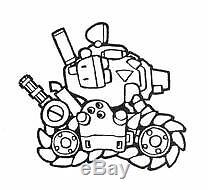 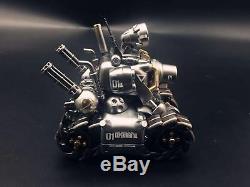 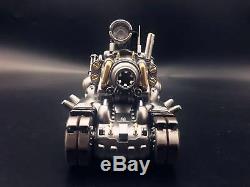 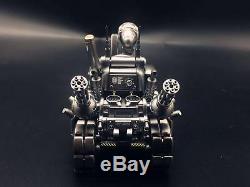 Metal Slug 5 SV 001- Complete 100% hand made and painted Collected e Tank scaled model kit. Is a Super Vehicle developed by the Regular Army. It is the namesake of the M. The SV-001 is a small, silver or gunmetal gray tank and is the very first "Super Vehicle" developed by the Regular Army. The tank also featured a digital all-bearings antenna, a periscope with thermal and night vision functionality, navigation and GPS systems, and is powered by a Hobten T-659G air-cooled Superconductivity Diesel Turbine Generator with an output of 12.00EP. It also has a top speed of 36 km/h (or 22.4 mph), slower than the famous M4 Sherman. The Metal Slug also has modular, 100mm thick armor plating consisting of depleted uranium, ceramic, and reinforced plastic (possibly kevlar). It also has a mine plow on the front of the chassis, but it had often failed to deploy and is unreliable. The vehicle can jump over obstacles using special hydraulic systems that operate at a pressure of 25,000 PSI. The hydraulics also allow the tank to crouch forward. Its claw-shaped treads are designed for maximum traction, and to climb over steep hills. In the ending cutscene of Metal Slug 3 , the SV-001 is depicted as having an inflatable raft that deploys when the tank falls onto a body of water. The tank is armed with a low-pressure rifled main cannon and two caliber Vulcan cannons. The main gun is located directly at the front like most conventional tanks and fires large, high explosive shells that detonate on impact; the shells can be reloaded on the fly from a container should the vehicle run out (SV-001's tend to come with a 10-shell preset amount).

However, the short, rifled barrel couldn't allow the shells to travel too far when they are fired, making for poor armor-piercing capability. However, what the shells lacked in range, they made up for in size and explosive power.

The cannon is also capable of using special ammunition, such as high velocity armor-piercing shells. The Vulcan cannons are fully controllable by the user and capable of turning 360 degrees with no delay and a continuous stream of seemingly unlimited rounds are shot at very high rates of fire when used.

However, the Vulcans are supported by weak frames, making them susceptible to falling out of place or being easily destroyed by enemy fire. On the sides of the main turret are smoke bomb launchers, but these could never be used during gameplay. Crouching opens the entry hatch, through which grenades could be thrown. The grenades are independent of the cannon's ammo system. The vehicle can also run over infantry and perform a highly damaging suicide attack, with the driver jumping clear and the tank ramming into and exploding upon the target. The vehicle can take three direct hits (four in the later titles) before it is destroyed.

Although impervious to Rebel infantry, they can still grope onto the vehicle or the cannon (front bore) to try and prevent it from firing and cause damage if not shot or shaken off. They do such things in a humorous way, though. One unused animation depicts one of the clinging Rebels throwing a grenade down the entry hatch. The main flaw of the SV-001 series lies in the tank's height and top-heavy weight distribution, causing it to tip over at inconvenient times, especially when firing the cannon. Another problem is its very high radar cross section, making it susceptible to high-speed guided missiles.

This item is in the category "Toys & Hobbies\Diecast & Toy Vehicles\Cars, Trucks & Vans\Contemporary Manufacture". The seller is "pvtt5776" and is located in Irvine, California.