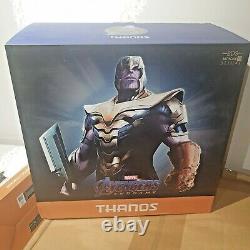 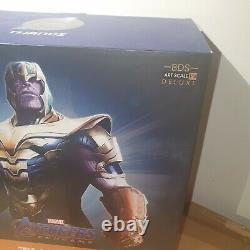 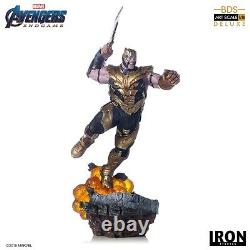 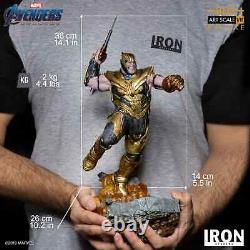 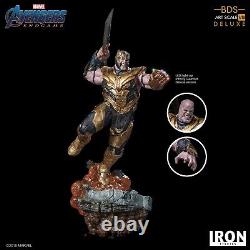 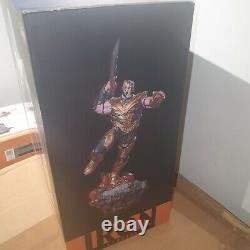 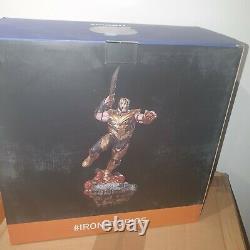 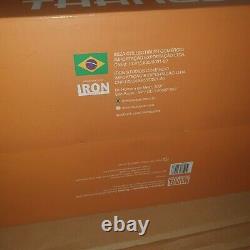 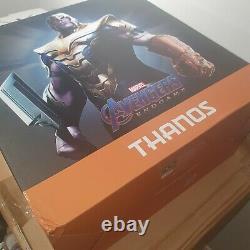 PLEASE NOTE: in stock, NEW SEALED AS PICTURED. PLEASE NOTE: although all items are new, we do not guarantee'mint' outer boxes, may it be clamshell or boxes.

If you require'mint' outer box, please request this, provided we have stock of an item with mint outer box, we shall accept all requests. BATTLE DIORAMA SERIES (BDS) ART SCALE 1/10. DELUXE THANOS POLYSTONE REPLICA STATUE - 14 / 36cm.

Iron Studios proudly announced the award winner of Best Small Statue of 2019, from the Battle Diorama Series Art Scale 1:10 line - Thanos: Delxue. The powerful villain warlord from Avengers: Endgame. Years after the Avengers: Infinity War, fans will find the remaining Avengers more determined than ever in this amazing film, as they will fight to save the lives after Thanos wiped out more than fifty percent of all living creatures after collecting all six Infinity Stones. Thanos Deluxe Collectible is a limited edition statue, based on original movie references.

This hot toy is made in polystone, hand painted with die cast sword. The Deluxe version of this Marvel Figure includes LED light up Gauntlet, with interchangeable left arm and head. Thanos is a fictional supervillain appearing in American comic books published by Marvel Comics. The character was created by writer-artist Jim Starlin, and made his first appearance in The Invincible Iron Man #55 (cover dated February 1973).

Thanos is one of the most powerful villains in the Marvel Universe and has clashed with many heroes including the Avengers, the Guardians of the Galaxy, the Fantastic Four, and the X-Men. The character appeared in the Marvel Cinematic Universe, portrayed by Damion Poitier in The Avengers (2012) and by Josh Brolin in Guardians of the Galaxy (2014), Avengers: Age of Ultron (2015), Avengers: Infinity War (2018), and Avengers: Endgame (2019) through voice and motion capture.

Thanos is a mutant member of the race of superhumans known as the Titanian Eternals. The character possesses abilities common to the Eternals, but amplified to a higher degree through a combination of his mutant-Eternal heritage, bionic amplification, mysticism, and power bestowed by the abstract entity, Death. Demonstrating enormous superhuman strength, speed, stamina, immortality and invulnerability among other qualities, Thanos can absorb and project vast quantities of cosmic energy, and is capable of telekinesis and telepathy. He can manipulate matter and live indefinitely without food, air or water, cannot die of old age, is immune to all terrestrial diseases, and has high resistance to psychic assaults. Thanos is also an accomplished hand-to-hand combatant, having been trained in the art of war on Titan.

DONT FORGET TO LOOK AT OUR OTHER LISTINGS FOR SOME GREAT COLLECTABLE TOYS. HIGHLANDS AND ISLANDS THEIR WILL BE AN EXTRA CHARGE. ALWAYS ENSURE YOU UNDERSTAND WHICHEVER SERVICE YOU CHOOSE.

WE OFFER SOME OF THE MOST COMPETITIVE RATES. This item is in the category "Toys & Games\Action Figures & Accessories\Action Figures". The seller is "nikkiuk84" and is located in this country: GB. This item can be shipped to United Kingdom, Ireland, Germany, France.