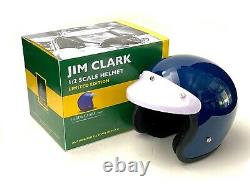 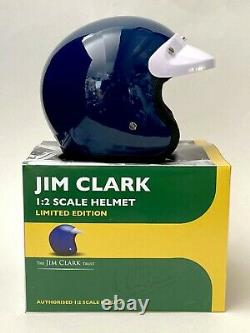 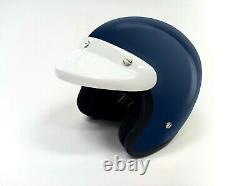 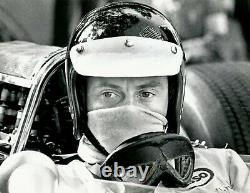 Jim Clark - Limited Edition 1:2 scale Replica Helmet. Our World Exclusive half-scale replica of the iconic helmet worn by Jim Clark - the most successful Formula 1 driver of all time. Jim Clark achieved 33 pole positions and won 25 races from his 72 Grands Prix starts, all for Team Lotus. He is remembered for his ability to drive and win in all types of cars and series, including a Lotus-Cortina, with which he won the 1964 British Touring Car Championship; Indianapolis 500, which he won in 1965; Rallying, where he took part in the 1966 RAC Rally of Great Britain in a Lotus Cortina; and sports cars.

He competed in the Le Mans 24 Hour race in 1959, 1960 and 1961, finishing second in class in 1959 driving a Lotus Elite, and finishing third overall in 1960, driving an Aston Martin DBR1. We are proud to be partnering with both The Jim Clark Trust and Classic Team Lotus to produce this authorized, limited edition replica in half-scale. A donation from the sale of every helmet goes directly to The Jim Clark Trust to support the Jim Clark Museum and Trail. Our half-scale replica will be the classic open-face helmet that Jim sported throughout his career, but specifically the'Grand Prix' helmet from 1965/66, featuring the deep blue shell, white peak with a three stud fixing, cloth strap and metal buckle.

The helmet is supplied in a soft bag and presented in a branded box, all fully authorized by the Jim Clark Trust and Classic Team Lotus. The item "Jim Clark Replica Helmet Limited Edition 12 scale NEVER OPENED" is in sale since Tuesday, September 7, 2021. This item is in the category "Sports Memorabilia\Motor Sport Memorabilia\Formula 1\Caps & Helmets". The seller is "andy2880" and is located in Bicester. This item can be shipped to United Kingdom.