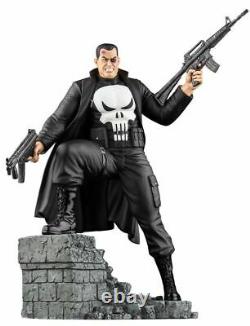 Punisher - 1:6 Scale Limited Edition Statue with interchangeable head-IKO0931. Brand New Fully Licensed Official product. Making his comic debut in the mid 1970s Punisher first appeared alongside The Amazing Spider-Man as a calculating vigilante. Audiences fell in love with the Punisher and he has since spawned his own self-titled comic series Using extortion kidnapping and murder in his war against crime. Wielding two high-powered articles of weaponry this Punisher statue is sized to 1/6 scale and is crafted from durable polystone. Also included is an alternate head sculpt to maximise display potential. The time for Punishment is here! Clockwork Culture is an Australian registered business based in Adelaide with an ABN.